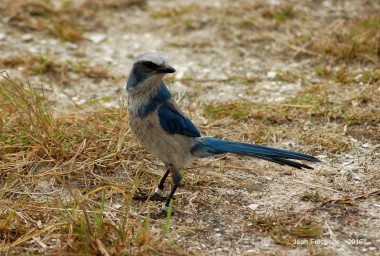 The Florida Scrub Jay is the only bird found exclusively in Florida.

This friendly and curious bird has been in serious decline in recent years due to development which has encroached on its natural nesting areas. The Florida Scrub Jay is now found mainly in central and south Florida with occasional sightings in the panhandle. It is estimated that fewer than 4,000 pairs currently exist and the population has dropped over 25% since the mid 1990s. The bird is listed as “Threatened” under the Endangered Species Act.

The “Threatened” classification has complicated development and building plans for many in the counties where the bird is found. Until recently, acquiring a building permit in a Scrub Jay nesting area was quite difficult and expensive. In Charlotte County however, in a test plan approved by the United States Fish and Wildlife Service, now streamlines the permitting process with a simple application and modest mitigation fee. The fees paid will be used to create a Reserve of approximately 4,500 acres in the county. http://charlottecountyfl.com/communityservices/naturalresources/scrubjays/

The name of the bird, Florida Scrub Jay, is descriptive of the habitat needed for the bird to survive. It will live in areas that are primarily types of low growing oaks. The height is important as the birds nest close to the ground, 3 – 10 feet. These trees are found in areas of bare sand with palmettos and other low growing vegetation. Before development, wild fires were a natural occurrence in Florida, creating open areas and keeping vegetation low. With development, fires were quashed and oaks and pines were able to grow tall, creating areas unsuitable for the Florida Scrub Jay.

The Florida Scrub Jay generally lives in a family group of a mating pair and helpers, usually older offspring who remain to assist the care and feeding of siblings. If an area of scrub opens up, helpers may leave to find a mate.

When you see a Florida Scrub Jay, stand back and enjoy the beautiful bird but don’t encourage it to come near you. Also, you should be aware that pet cats are a major threat to birds of all kinds. Spaying and neutering pet cats and keeping them indoors will help protect the Florida Scrub Jay as well as other species of birds.